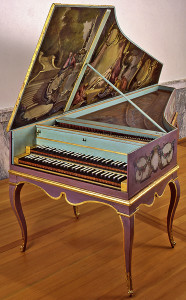 The Harpsichord came before the Piano

Do you know that the well known piano has a distant cousin called a Harpsichord?

The beautiful sound of the piano has be “fine tuned” over centuries beginning with this Harpsichord.

The earliest surviving harpsichords were built in Italy in the early 16th century. Little is known of the early history of the harpsichord, but, during the 16th–18th century, it underwent considerable evolution and became one of the most important European instruments. They are similar to the piano in many ways.

the harpsichord has two or more sets of strings, each of which produces different tone qualities. One set may sound an octave higher than the others and is called a 4-foot register, whereas a set of strings at normal pitch is called an 8-foot register, (the length references the string.)

Applied the soundboard decal to the Mason A.  It came in 2 parts that had to be done separately.  The largest w/the eagle was an alcohol transfer; it was challenging to lay precisely over the shadow of the orig.  The word Boston was simply a stick on.  A good spray coat of lacquer sealer soft sanded w/ 180 grit served as the base for the decal(s).  Just the right amount of denatured alcohol must be used for a perfect transfer to the soundboard.  As a last step to seal a light coat of lacquer was shot over the area.

Plate re-gilding can sometimes be a tricky project. In our shop we’re presently doing just that to one from a ’33 Mason A. After thorough cleaning a lacquer based primer was applied to a small section for test. There were problems; it seems that when the instrument had been re-pinned/ strung some 40+ years ago an automotive type metallic paint was used to spray the plate. This explained why a lacquer based coating would crinkle – a lot. Blasting w/ a very gentle abrasive quickly removed this problem layer of enamel. Now lots and lots of gentle sanding . . .
I have been working on a Steinway 1098 action which was attacked by mice. The nest was located, not under the keys, but right in the action itself. Nearly an octave’s worth of hammer butts, shanks, backchecks, etc were gnawed away to make room in addition to damage to keys and other stuff. Quite a clean-up project w/ the case. Replacing the hammer butts and so forth has been a challenge. Since orig. parts are not available it was necessary to use the best fitting butts, an asian style with flanges slightly larger than those in the action. These flanges were switched out. Now it remains to install and regulate, which will be the true test. In the meantime wire mesh was installed along the bottom of the piano as a preventative (this is where the nearly 100 year-old tilter comes in handy).

Alexander D’Von Boggs is a Steinway certified piano technician and Piano Technicians Guild member. Services include in home piano tunings, piano pitch raises to A440 hz and concert formats. He is a skilled prep technician specializing in action regulation and repair.