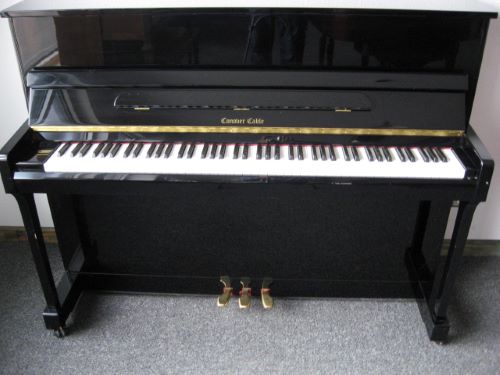 This piano is in nearly new condition.  It was purchased from the Washburn Piano Company here in Albuquerque in 2005.  We acquired it from the original owners, and it never left the address it was originally delivered to until now.  Pianos don’t like being moved around a lot.  Having lived here its entire life it is happily acclimated to our unique climate and ought to provide decades of musical enjoyment to its new owners.  This Conover Cable model CC-145 studio upright piano is in excellent condition – structurally and aesthetically.  It wasn’t played very much so there is minimal wear in the action and trapwork.  We didn’t have to do much in our restoration shop to prep it for sale, just a concert tuning and minor regulation.   We will be happy to offer a two-year warranty.  It has a pretty tone-quality and a nice touch.  The bass is robust.  The tenor is rich and resonant.  The treble has a nice and clear bell-like quality.  The action plays accurately, expressively and responsively.  The original bench with music storage is included.  So is local, first-floor delivery to your home.

Established 1883 as the Conover Piano Company by J Frank Conover in Oregon, Illinois.  Conover was joined by H D Cable in 1890 to form the Conover Cable Piano Co.  J Frank Conover passed away in 1918.  The company later became The Cable Piano Company in 1966 when Aeolian-American acquired them and built them until Aeolian’s demise in 1982.  In 1996, Conover Cable was reintroduced by Samick Music Corp. and the pianos were built in their modern Indonesia factory until 2008.  They were identical to Samick pianos and sold in markets where an additional piano line was needed.  Sadly, Conover Cable pianos are no longer being built today.