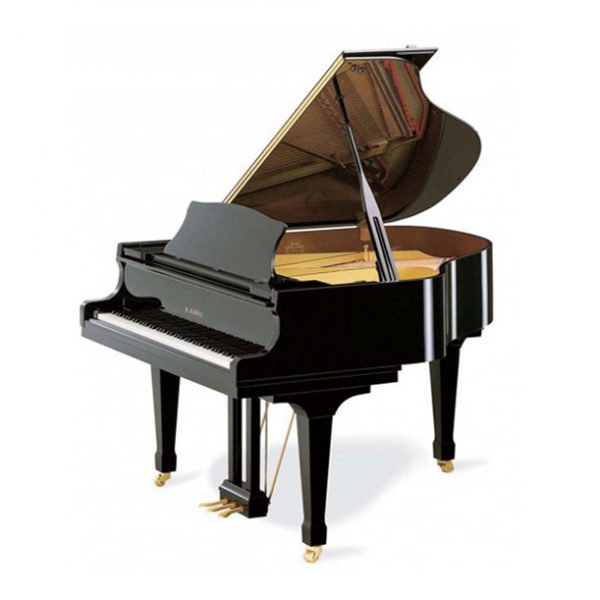 The RX-1 Classic Grand is considered a Kawai Legacy Instrument, the popular entry-level model of the award-winning RX-Series Grand Pianos that were first introduced in 1995. Collectively, they were chosen “Acoustic Piano Line of the Year” by MMR Magazine’s Dealers’ Choice Awards in 2003, 2004 and 2005.  (MMR is Musical Merchandise Review – our industry’s most respected Trade Magazine).  This Kawai model RX-1 grand piano is a one-owner and was purchased new here in Albuquerque at the very fine Kawai dealership, Piano Source.  It is happily acclimated to our unique arid climate.  Per our policy, we only source our pianos locally.  It’s in excellent condition – structurally and aesthetically.  All it needed in our restoration shop was tuning and nothing more.  It should provide many decades of exceptional musical performance and we are happy to offer a two-year warranty.

RX-series grand pianos offer a number of exclusive features that enhance the piano’s performance.  All RX-series models have Kawai’s revolutionary Millennium lll piano-actions that outperform other actions in the areas of reliability, durability and long-term consistency of touch.  At the heart of this 21st Century piano-action is a technology that Kawai calls their “Ultra-responsive ABS Action”.  A description of their ABS material that is infused with carbon-fibers follows below.  Additionally, they have their Extruded Aluminum Action Rail that is both strong and consistent.  The Kawai trade-marked white and black key material is called Neotex and it feels more like ivory and ebony used to.  The hammers are made with mahogany mouldings, which improves the responsiveness of the action and the tonal sustain.  Their CORE system (Convergence for Optimum Reflective Energy) features an Inner-rim built from a hardwood called “Matoa” that reflects the vibration-energy back to the center of the soundboard for a longer duration of tone. This soundboard is also tapered for improved tonal response.  The keybed is double-braced and steel-reinforced to prevent warping and flex.  The fallboard has their Soft Close System which is a slow-close function that prevents smashed fingers.  The “Hard Finish Music Rack” is an exclusive feature of all RX-series grands, and it prevents music books and music writing implements from scratching the polished ebony finish.  The original concert bench is adjustable for the different pianists in the family.  Professional, first-floor local piano delivery is included.

Kawai was founded in 1927 by Koichi Kawai, an inventor and former Yamaha employee who was the first person in Japan to design and build a piano action. While Kawai is second in size to Yamaha among Japanese piano manufacturers, it has a well-deserved reputation all its own for quality and innovation.  Kawai’s quality control is excellent. Major problems are rare, and other than normal maintenance, after-sale service is usually limited to fixing the occasional minor buzz or squeak. Kawai’s warranty service is also excellent, and the warranty is transferable to future owners within the warranty period (a benefit that is not common these days). The tone of Kawai pianos is close to ideal for classical music especially in a comparison with more expensive instruments, and in any case, they are quite versatile musically. In part because the touch is so good, Kawai grands are often sought by classical pianists as a less-expensive alternative to a Steinway & Sons or other high-end European piano.

One of Kawai’s most important innovations is the use of ABS Styran plastic in the manufacture of action parts. More than 40 years of use and scientific testing have shown this material to be superior to wood for this purpose. ABS does not swell and shrink with changes in humidity, so actions made with it are likely to maintain proper regulation better than wood actions. The parts are stronger and without glue joints, so breakage is rare. These parts are present in every Kawai piano. In the current Millennium III action found in some models, the ABS is reinforced with carbon fiber so it can be stronger with less mass. Having less mass to move (that is, less inertia), the action can be more responsive to the player’s intentions, including faster repetition. Certain contact surfaces on the action parts are also micro-engineered for ideal shape and texture, resulting in a more consistent touch. Although it took a number of years to overcome the idea that plastic parts must be inferior, there is essentially no dispute anymore among piano technicians on this subject.