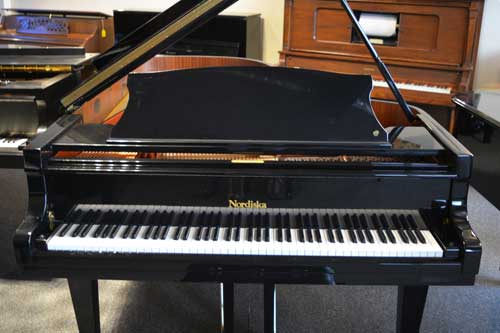 This Nordiska grand piano was manufactured in 2007 in Liaoning, China by the Dongbei Piano Group Co. In 1999 Geneva International Corporation based in Chicago started distributing Nordiska pianos in the North American market, joining their Petrof/Weinbach imports. Originally from Sweden the brand was acquired in 1985 by the Yin Kou piano factory who moved all the equipment in a huge ship to China. At 7′ this grand commands the room. The treble sparkles and the tenor is balanced down to the growling bass. This piano was originally sold through Charles’ Pianos in Albuquerque the then Steinway, Petrof/ Weinbach & Nordiska dealer, and I have been personally tuning this piano every year since.