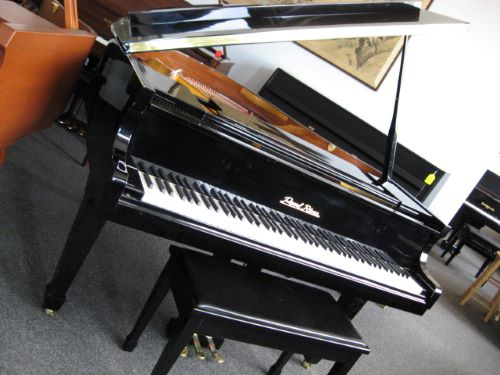 This understated, small grand piano doesn’t have a big tone, but it has a pretty one.  It certainly won’t fill a concert hall with thunderclaps of bass tonality, but it makes perfect sense for a smaller living space where the pianist values the feel and touch of the grand piano-action.  The wider dynamic range, better key leverage and the feel of the hammers being in direct opposition to the force of gravity are advantages over an upright piano-action.  In addition to the smaller footprint, apartment dwellers may also appreciate the reduced volume carrying into other neighboring apartments.  The Pearl River model GP-142 grand piano is equipped with several features also found in the bigger pianos of the line, that could be omitted in other piano lines in order to reduce costs.  It has a true Sostenuto pedal in the middle where many small pianos don’t.  A creative pianist can expand their playing ability and performances with Sostenuto.  The fallboard has a Slow-close function to spare fingers from being smashed and loud crashes when a fallboard accidently falls.  In addition to the standard long lid-prop it also has a second short one for the half-lid position.  Lowering the lid to halfway is a handsome way to display your piano.  Its spade legs are more shapely than regular square ones on other models.  Complimentary local, first-floor professional delivery and set-up is included.  The matching padded bench with music storage is also included. 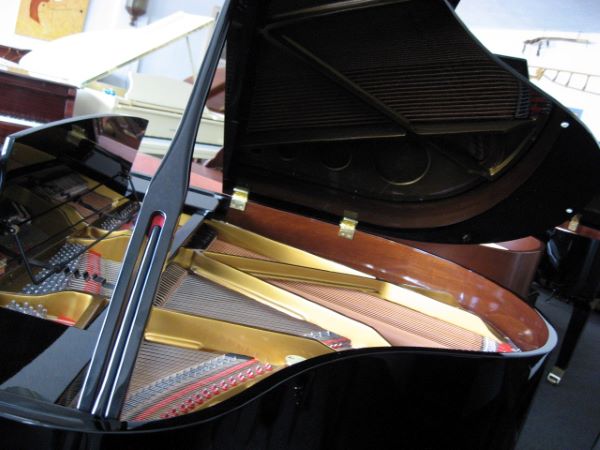 Stunningly beautiful, inside and out. 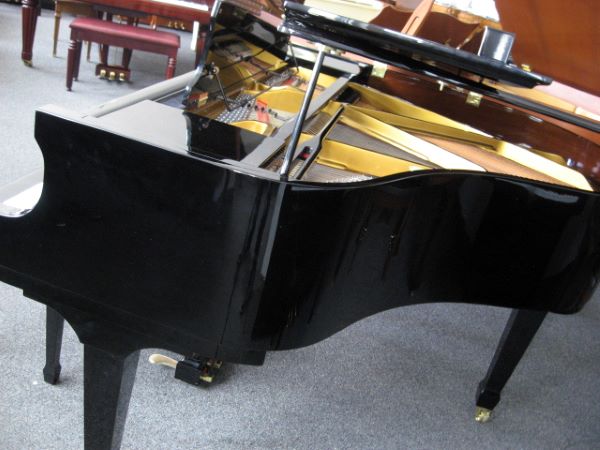 Pearl River today, is the largest and best-selling piano manufacturer in the world and they have the largest market share in retail sales worldwide. They are sold in over 112 countries. Pearl River dominates the Chinese market share with 40% of all the new pianos purchased. The modern 1.2 million square foot factory is located in Guangzhou, China and employs over 4000 workers. With over 8500 individual parts in a grand piano, a location with lower labor rates is desirable. Every single large, small or tiny part is handled by human hands. Pearl River Piano Group builds the Ritmuller and Kayserburg pianos as well as pianos for other companies, including the Essex for Steinway & Sons.
This instrument is a one-owner. It was purchased new here in Albuquerque at the long-time Pearl River Piano dealership, Kitt Fine Pianos, so it has lived in a dry climate all its life and is happily acclimated to our unique humidity level. It should provide many more decades of musical enjoyment. It is in excellent condition, structurally and aesthetically. We will be happy to offer a two-year warranty. It came to us needing very little in the way of piano dealer prep in our restoration shop. We cleaned it thoroughly, regulated and tightened the piano-action and tuned with only a slight pitch correction. It plays well and the tone quality (timbre) is center-mellow. Many small pianos have a thin, shallow tone but this was avoided through better engineering and construction techniques plus higher quality materials.