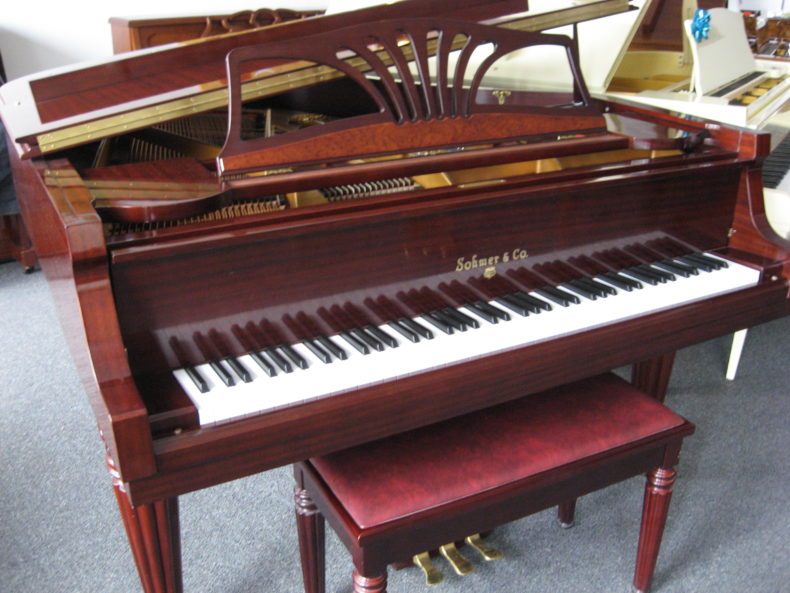 This venerable old piano brand was brought back to life and built in its original traditional fashion with beautiful furniture styling and premium quality construction and components.  Though the grand piano-scale has been improved and updated, this Sohmer & Co model 77H grand piano still resembles the vintage American-made pianos of its past.  Its outer rims are still maple hardwood for durability.  The plate is sand-cast, not a vacuum process.  The soundboard is solid white spruce in order to produce a lovely tone.  The wrest-plank (pinblock) is American hard-rock maple to grip the pins more tightly and for a longer duration of time.  The hammers were selected from Renner in Germany; among the finest in the world.  Action rails are costly beech and maple, not aluminum.  The finish is a classic lacquer semigloss red mahogany and the hardware is solid brass.  Other high-quality features are prevalent too.  The piano was built in 2004 and sold new at the Washburn Piano Co here in Albuquerque.  It is a one-owner and never left the home it was originally delivered to, until now.  It is happily acclimated to our unique climate and will surely provide decades of musical expression.  We will offer a two-year warranty on the instrument and tune it after delivery.  It was played sparingly and has very little wear in the moving parts.  Its main function in its previous home was to be the elegant focal point of the formal living room.

The piano has the classic Sohmer and American piano tone quality.  The bass is robust and powerful with pleasing overtones.  The tenor is rich with a long sustain and the treble has a clear and rounded bell-like quality.  The Duplex scale design, only available in the finest pianos, is partly responsible for the wonderful treble response.  The piano-action is accurate and feels wonderful to the touch.  We have it well-regulated by the technicians here.  The 5’-9” size obviously has an enhanced tone over smaller baby grands but additionally, its longer length provides graceful curves that make it even more aesthetically pleasing.  It’s equipped with a true Sostenuto pedal and two-position lid prop.  The original matching bench with storage is included.  Local first floor delivery is included.  Sohmer & Co model 77H Grand Piano S#KJNFG 0158  88 Keys Piano Warehouse & Showroom price – $10,950.

The company was founded by German immigrant Hugo Sohmer in 1872.  His sons and grandsons went on to own and run the factory for 110 years as a family-owned business and the fierce pride that goes along with it.  As a result, the pianos were reliably known as fine and handcrafted instruments and considered to be among the very finest.  During those many years in New York, the family had a close association with another major family-owned piano builder – Steinway & Sons.  Many of the Sohmer manufacturing methods were similar to Steinway’s.  With getting older and no heirs to take over the business, in 1982 Harry and Robert Sohmer sold the company to Pratt, Read & Co, a leading manufacturer of piano keys and actions.  They stayed on as consultants for a time and it was a good match for a while but the decline in American piano manufacturing and the rise of foreign competition eventually caused another ownership change and then the company stopped production altogether.  Around 2002, Samick Musical Instruments in South Korea, one of the largest manufacturers in the world resurrected the fine Sohmer brand and that is where this wonderful instrument was built.