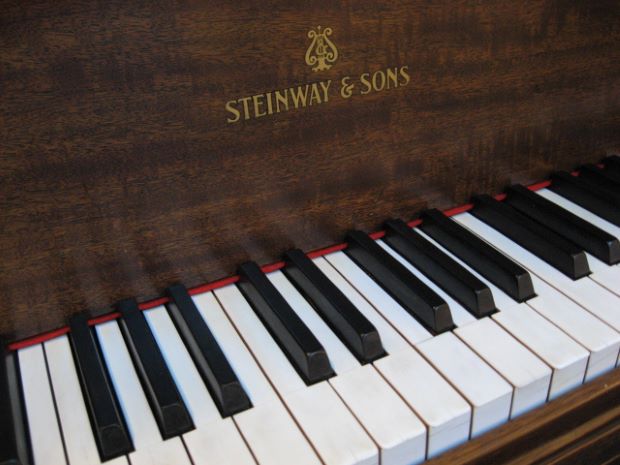 This 1917 Steinway & Sons model O parlor grand piano is one of the finest musical instruments ever built. It is the largest of Steinway’s “smaller” pianos. This was the golden era of American piano building and Steinway & Sons was the piano that every other was judged by. It is handcrafted and took a full year to build. The Steinway factory held most of the important patents in the industry and the family participated in all of the significant operations. In the world of musical instruments, there are pianos – and then there are Steinway & Sons. The model O features the classic “Steinway sound”; having a strong, singing treble and a powerful bass, rich in high harmonics. The duration of tone (sustain time) is lengthy, which enables legato phrases to be enjoyed. The dynamic range is wide, allowing the pianist to play expressively and emotively. The mid-treble, where most of the melody lines are played “sings” and doesn’t disappear under the background of an accompaniment. It has the power that most pianos aspire to but not the brash “loudness” that often results. This permits the clarity of tone that Steinway & Sons is well-known for – the ability to clearly hear each individual note played in a chord or group of notes. Otherwise, a “muddy” tone results. This instrument is suitable for the more advanced player, professional pianist or anyone with superior or acute hearing. Any music school, teaching studio and institutional setting would benefit from this piano. 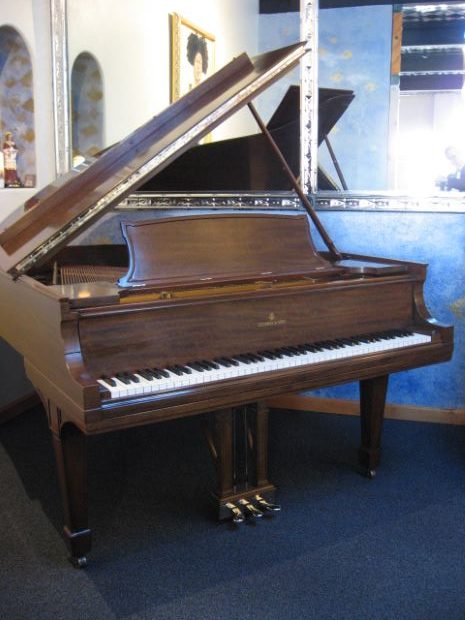 Mint condition and ready for the performance 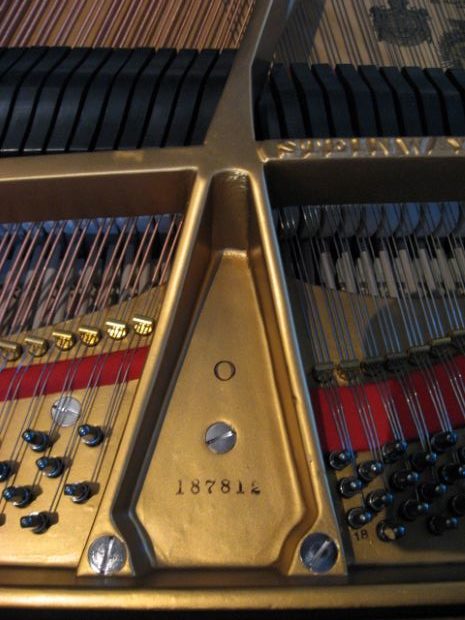 Hand-made by American and German craftsmen

This piano was completely restored recently in our restoration shop. The very finest materials and construction techniques were employed in this extensive eight month process. Pianos Bolduc from Montreal, Canada is the company that produces the current Steinway & Sons pinblocks, so we constructed a new highest-quality 5-ply quarter-sawn, tight-grained rock maple Bolduc pinblock and painstakingly fitted and doweled it into the piano’s inner rim. Steinway always glues and dowels its pinblocks rather than allowing them to “float” between the rim ends like nearly all other makers do. This makes their restorations quite a bit more difficult. New, premium German-made Renner Blue Point hammers, shanks and flanges replaced the originals. They are the same as used in the Hamburg Steinway & Sons models built in Germany. The dampers, wires and damper felts were also replaced with Renner. The repetition levers and springs were replaced with Renner, as were the let-off buttons and backchecks. It was re-strung with new Steinway bass strings and music wire. The flame-mahogany cabinet was gently stripped and beautifully refinished by our experts. So was the plate, and re-lacquered with genuine “Steinway gold”, the traditional hue for Steinway plates.

The soundboard was in excellent condition surprisingly, requiring no repairs or replacing, so all we needed to do was clean and refinish with fresh lacquer. The original soundboard decal was lost to the refinish but we replaced it with the identical design. It shows the State Seals and Medallions of twelve pre-WW1 countries and kingdoms that owned Steinway & Sons pianos in their palaces, castles or official Houses of Government. After the war ended, some of these governments no longer existed. The factory ceased applying these soundboard decals at this point in deference to these historical changes. The piano was built in 1917 and this important serial number (187812) is one of the very last Steinway & Sons grand pianos to sport this unique decal. Due to enforcement of their rights to this proprietary logo these official decals are now no longer available to rebuilders, making this a very unique piano. 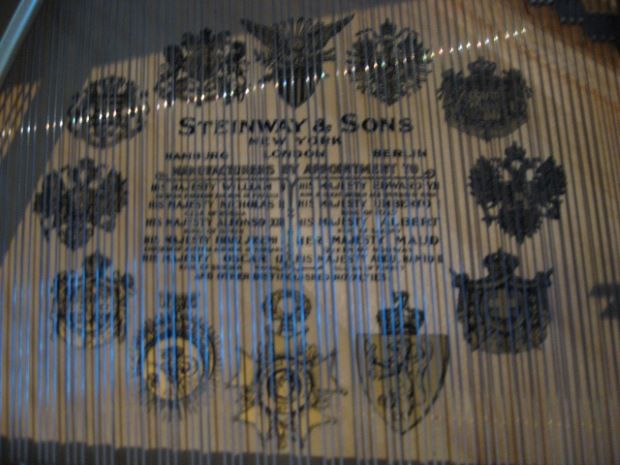 Seals and medallions of twelve countries and kingdoms 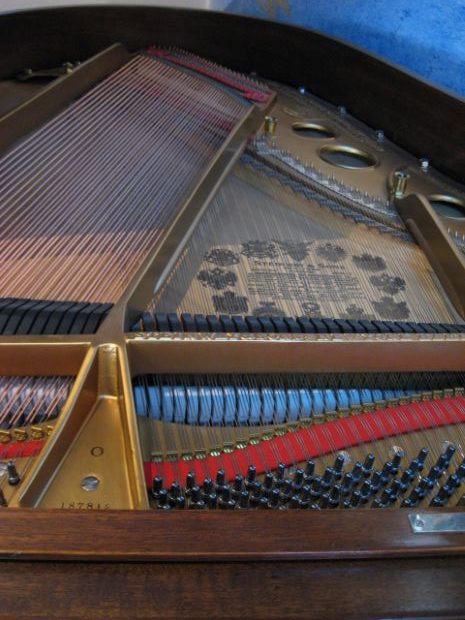 The genuine ivory keytops were carefully cleaned and bleached. It is rare indeed to find ivory in such wonderful condition after all these years. They are in gorgeous condition with a warm, soft-white lustrous glow.  The wooden sharp keys were cleaned and lacquered black to perfection. All of the cabinet hardware, plate bolts and casters were re-plated in brass. The new piano-action components have been well-regulated, the new strings stretched and tuned several times, and the piano is finally ready now for concert performances. 88 Keys Piano Warehouse will be happy to warrant our restoration work for two years.

This is truly a historical piece of Americana. The piano was purported to be shipped by railroad to New Mexico shortly after being built.  It was most recently sold in 1991 by Riedling Music, the sole New Mexico Steinway & Sons dealership for 75 years.

Manufacturers by Appointment to:

His Majesty Umberto I – King of Italy

His Majesty Albert – King of Saxony

His Majesty Franz Joseph I – Emperor of Austria & King of Hungary

Her Majesty Maud – Queen of Norway

And other Distinguished Royalties.