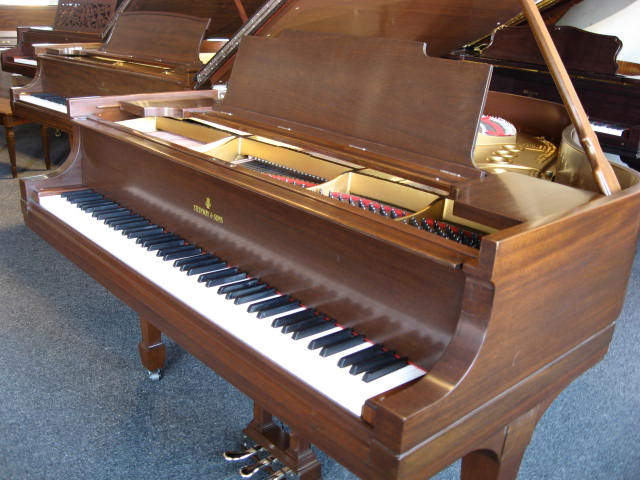 This 1926 Steinway & Sons model M Studio grand piano is one of the finest musical instruments ever built.  It is truly a historical piece of Americana.  This was the golden era of American piano building and Steinway & Sons was the piano that every other was judged by.  It is handcrafted and took a full year to build.  The Steinway factory held most of the important patents in the industry and the family participated in all of the significant operations of the factory.  In the world of musical instruments, there are pianos – and then there are Steinway & Sons.

One year before this instrument was built is when Steinway Hall was completed.  Three years later, Horowitz and Rachmaninoff met in the hall’s basement and played Rachmaninoff’s 3rd Concerto, which became Horowitz’s trademark.  Ads were released that proclaimed the Steinway & Sons piano to be “The Instrument of the Immortals“.

This piano was completely restored recently in our restoration shop.  The very finest materials were employed in this extensive  fourteen-month process.  Bolduc is the company that produces the current Steinway pinblocks so it received a new 5-ply premium hard rock maple Bolduc pinblock.  New premium Renner Blue Point hammers, shanks and flanges replaced the old ones.  New Renner damper felts and wires replaced the old ones.  The repetition levers and springs were replaced with Renner also, as were the let-off buttons and backchecks.  It was re-strung with new Steinway bass strings and music wire.  The flame mahogany cabinet and original bench were beautifully refinished.  The soundboard was free of serious cracks, so it is original and it was also refinished. The keys were recovered with the finest keytop material.  All of the cabinet hardware, bolts and casters were re-plated. 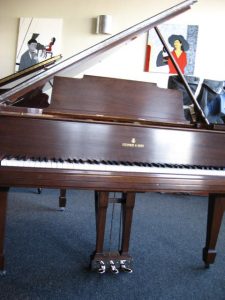 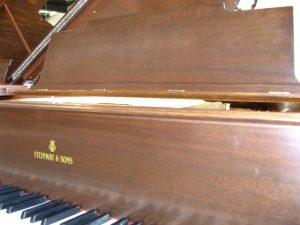 This model M features the classic “Steinway sound”; having a strong, singing treble and a powerful bass, rich in high harmonics.  The duration of tone (sustain time) is lengthy, which enables legato phrases to be enjoyed.  The dynamic range is wide, allowing the pianist to play expressively and emotively.  It is neither overly mellow and dull or overly bright and tinny.  The mid-treble, where most of the melody lines are played “sings” and doesn’t disappear under the background of an accompaniment.  It has the power that most pianos aspire to but not the brash “loudness” that often results.

The Steinway & Sons model M Studio Grand piano action is the vanguard of piano actions.  Steinway held most of the patents issued to piano manufacturers for action improvements including the exclusive “Accelerated Action”, which increases the speed of repetition.  The Tubular Metallic action frame maintains proper alignment of the action parts.  This action has been well-regulated and ready now for concert performances. 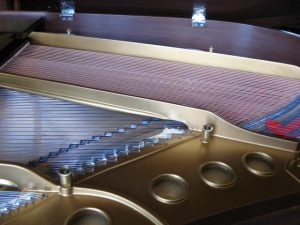 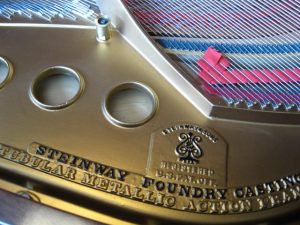