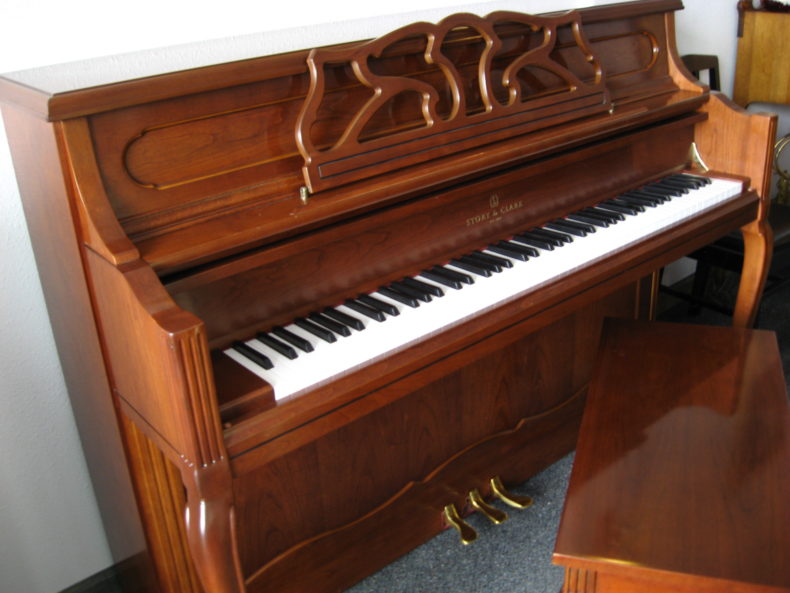 In the Story & Clark Heritage Series, this is the graceful and elegant “Calais” model in French Provincial with a satin lacquer genuine cherry finish.  In addition to its obvious beauty this is a serious musical instrument.  At 44 inches in height, it is more of a studio upright than a console piano where most are 40-42 inches tall.  The additional height provides longer strings in the bass section and a larger soundboard with both combining to offer a more robust and powerful tone with a longer duration of sustain.  This also affords a full-sized piano-action that plays more sensitively with a wider dynamic range than a compressed console piano-action can.  The Story & Clark model SC-H6 console piano is standardly equipped with an exclusive feature called PNOscan.  It is an optical sensor strip mounted under the keyboard that senses the movement and velocity of the keys in order to precisely recreate the pianist’s performance.  This becomes MIDI data that is transmitted through a USB type C cable exiting under the keybed that can be connected to a computer, sound module or other MIDI devices.  Thus, an ordinary acoustic piano becomes a hybrid digital piano that gives users the ability to record, learn, compose, practice in silence and more.

This Calais model was built in 2008 and purchased new here in Albuquerque where it has lived its entire life, so it is happily acclimated to our unique arid climate.  It should provide decades of trouble-free musical enrichment.  The piano is in excellent condition, structurally and aesthetically.  We will offer a two-year warranty.  It proudly features Story & Clark’s own Storytone ll soundboard.  The large music desk will accommodate heavy music books and long musical scores, unlike a flip-down music rack could.  The middle pedal engages a practice mute rail for quiet play.  The key cover is a true two-piece Boston fallboard with a full-length piano hinge that fits perfectly over the keys.  The original matching bench with storage is included.  Local first-floor delivery is included.  Story & Clark model SC-H6 Console Piano S# IJRGU 1563  88 Keys Piano Warehouse & Showroom price – $3950.

Hampton Story began building pianos in 1857 and was joined by Melville Clark in 1884.  The factory was located in Grand Rapids, Michigan which was called “Furniture Country” at the time due to its numerous factories.  Logging and lumber mills thrived there due to the vast forests of diverse timber in the area which included the US north and Canada.  Hardwoods and softwoods were plentiful.  A piano is constructed with various different species of wood, depending on the need whether it be strength, flexibility, density, beauty, uniformity of grain etc.  After leaving the piano industry, Mr. Story went on to build the luxurious Hotel del Coronado in Coronado, California.  Mr. Clark, ironically went on to found QRS (Quality Roll Systems, think player-piano rolls) in 1901 and designed the old-fashioned player-pianos and eventually, the PNOscan and the new disk-player systems that are so popular today.  Those systems are actually all wireless with networks today.