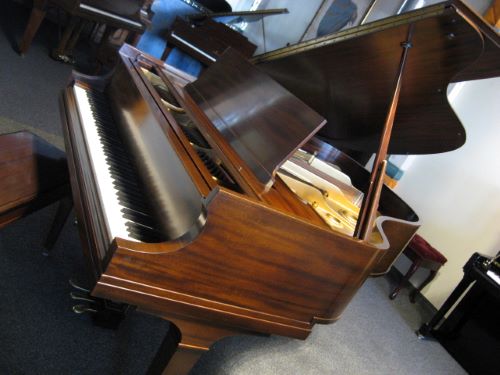 In a warm, rich banded mahogany lacquer finish, this is a lovely musical instrument.  It has genuine ivory keys and they’re in flawless condition, which is a rarity.  The sharp keys are wood, and not plastic, so the keyboard has a unique, old-world feel.  The pianos’ structure is excellent, and it has had modest playing time.  It has lived in Albuquerque for decades, so it is happily acclimated to our arid climate.  Per our policy, we always source our pianos locally.  That makes for a stable instrument, musically.  Alexander Boggs, the owner of 88 Keys Piano Warehouse has tuned and serviced this piano for years.  We had to do very little to the piano in our restoration shop, just basic tuning, regulation, touch-up and cleaning.  The venerable Baldwin model R grand piano has been built for nearly a century and is one of the most popular Living Room grand pianos ever built.  At 5’-8”, it is a little longer than other competing pianos in its class.  They feature an unusually strong bass response that literally growls and a clear singing treble and a pleasing tenor.  That depth of bass in the Baldwin scale design permits the “walking bass line” employed by many jazz musicians.  It is rich in tonal colors and has a nice long duration of sustain and a truly marvelous dynamic range across the keyboard.  It could easily be mistaken for a 6’ piano.

Baldwins are a sturdy piano, and you’ll find them in institutional settings where they hold up well and are considered to be low maintenance.  They have been a favorite among private piano teachers who may not be able to afford the more expensive Steinway & Sons piano. Structurally, they were built like a Sherman tank, and you would find their studio uprights in the practice rooms of nearly every university or conservatory of music.  Complimentary local, first-floor professional delivery and setup is included.  The original bench with storage is remarkably sturdy and well-built.

This one was built in 1953, which may sound old, but this is a very good era for the Baldwin factory in Cincinnati.  They had access to fine old-growth woods which were plentiful and inexpensive.  Baldwin management took pride in their pianos and a lot of quality wood was left on the floor at the end of the day because it wasn’t quite good enough for its application in the piano.  They liked to quarter-saw the wood for superior dimensional stability though it was more wasteful than other cuts.  The factory was teeming with craftsmen, many of whom apprenticed there or and had a father who brought them in to learn the craft.

The D. H. Baldwin Piano Company was founded in 1863 by Dwight Hamilton Baldwin and became the largest selling American manufacturer of pianos throughout its long and rich history. They began piano production in 1890 after having retailed the Steinway & Sons and Chickering piano lines.  The model R is one of the Baldwin Artist series models and has long been a favorite of concert artists in all genres of music.  Most notable was Liberace who played exclusively on the Baldwin.  The official Baldwin Concert Artist list includes Dave Brubeck, Earl Wild, John Williams (Star Wars soundtrack) Aaron Copland (Boston Pops Orchestra conductor), Count Basie, Bruce Hornsby and a long roster of concert pianists, composers and musicians who endorsed them without any financial consideration.  The Audio Engineer Society published a study and ranked the Baldwin as having the best tonal quality of the five manufacturers, including Steinway that they reviewed.