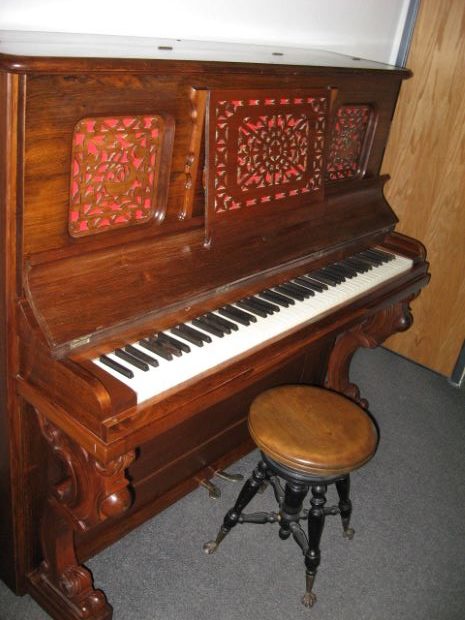 Lyon & Healy Upright piano is an Elegant Old Lady and a bit of Americana.

Vintage manufacture year of 1878 and viable musicality is represented in this 19th century period piece, meaning she plays well and looks great! This beautiful piano arrived in Albuquerque by way of the new railroad in 1889 and was unloaded at the train depot downtown. It was delivered by a horse drawn wagon east of downtown to the Ridgecrest neighborhood where it stayed in the home and family for three generations. A fire department Captain acquired it from family members after the home was to be sold. It was taken to the captain’s firehouse where he played it during down times. This was great entertainment for the other firefighters and himself. Upon his retirement two years later, 88 Keys Piano Warehouse became aware of the instrument, and we acquired the Lady. 1878 is also the year Lyon & Healy patented this “Cottage Upright“, a small boudoir-size upright that enjoyed great success because it didn’t visually dominate the room like larger uprights did.

This vintage Lyon and Healy upright piano features a completely original structure and parts, and it came to us in fairly amazing condition. All that was needed was tuning, a few minor repairs and action regulation by the technicians here at 88 Keys restoration shop. This process was done over several weeks. The tired finish was brought back by using natural oils and to ward off future drying out and cracking. We believe the finish is rosewood. The original key-tops are genuine ivory and are in great condition. The sharp keys are hardwood lacquered black (possibly maple or hornbeam) and also in great condition. It is tuned to the standard pitch of that era, meaning a little flat so it has a warm, mellow tone and is ideal for classical music. This piano was literally built with hand tools – there was no electricity in the factory for tools or lighting, just the light furnished by way of the large open windows. All carvings were probably rendered using a variety of handsaws, chisels, wooden mallets, rasps and hand-drills.

Lyon and Healy, Est. 1864 in Chicago, Illinois has a historical presence in American musical instrument building. Their amazing harps are what they are best known for. They began building them in 1889 and quickly became regarded as the finest harp in the world. They were known to be durable and stable in harsh climates, unlike the more delicate ones built in Europe. Although the pianos were discontinued in the 1970’s, these harps are still being built in Chicago to this very day.