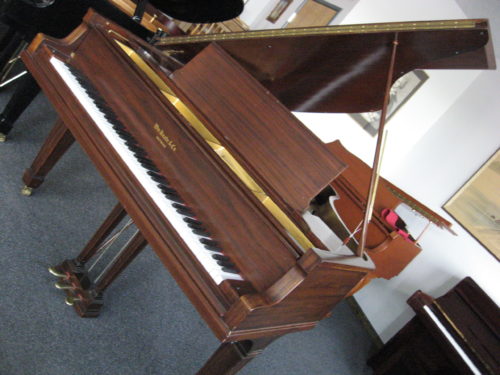 This classic American piano was rebuilt in the 1990’s and it plays and sounds extremely well.  It is both a performance piano and a prized collectible, having historical value as a piece of Americana.  It was built in 1920 at the original factory in Baltimore, Maryland prior to the factory being relocated to E. Rochester, New York which makes it far more desirable.  The Wm Knabe & Co grand piano was the “Official piano of the Metropolitan Opera” in New York during the 1920’s when this piano was crafted.  They are always mentioned in the top five with the order being debatable, in terms of quality and scale-design among the many American piano manufacturers over the years.  This instrument has the classic American tone, best described as having a strong and robust bass, rich in high harmonics with a singing treble that has a long duration of tone and sustain.  The action plays responsively with a nice repetition, and it has a nice touch-weight, neither too heavy nor too light.  Alexander Boggs has serviced and maintained this piano here in Albuquerque for over fifteen years.

Wm Knabe & Co is one of the most respected and illustrious names in the American piano building history. They built some of the most elaborate, finest and expensive pianos in history.  Their patents were numerous and they had many innovations.  The company was founded by William Knabe in est. 1837.  He was born in Kreutzburg, Germany in 1803 and immigrated to Baltimore in 1833.  His two sons took over upon his death 1864.  By 1908, they were gone and the company joined the American Piano Co. which eventually became the Aeolian-American Corporation, which built some of the most numerous and popular pianos of the 20th century.  In the German language, the word “knabe” means “young boy” or “lad”.