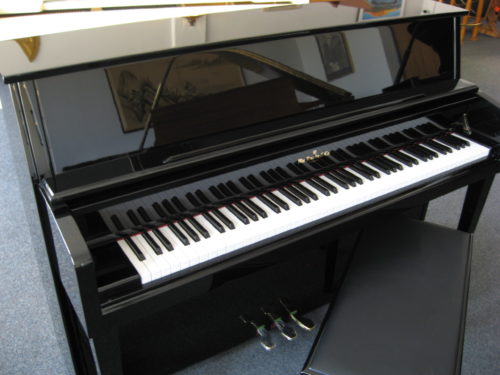 This piano was purchased new here less than two years ago and it is in mint condition.  It was barely played and could be considered as a brand-new piano.  The Wm Knabe & Co piano is the flagship brand for Samick Musical Instruments, one of the largest musical instrument companies in the world.  The model WMV245 Professional Upright piano is part of the Academy line of the companies’ Institutional pianos.  They feature premium solid Canadian white spruce soundboards, German hammers and strings, hardwood action parts, traditional sand cast plates and 15-ply hard-rock maple pinblocks among other premium quality materials and construction.  They are designed with a full-length music desk to accommodate long musical scores and a slow-close fallboard to protect fingers.  This instrument has the classic American tone, best described as having a strong and robust bass, rich in high harmonics with a singing treble that has a long duration of tone and sustain.  The action plays responsively with a nice repetition, and it has a balanced touch-weight, neither too heavy nor too light.  The current MSRP at PianoBuyer.com is $10,679. and $11,191. at PianoPricePoint.com

The Wm Knabe & Co piano was the “Official piano of the Metropolitan Opera” in New York City for over 40 years and is one of the most respected and illustrious names in the American piano building history.  The company sponsored Tchaikovsky’s appearance at the opening of Carnegie Hall.  A number of US Presidents have owned these pianos in the White House and there is one in Elvis’ Graceland.  Today, Knabe is the official piano of the American Ballet Theatre at the Met.  They built some of the most elaborate, finest and expensive pianos in history.  Their patents were numerous and they had many innovations.  The company was founded by William Knabe in est. 1837.  He was born in Kreutzburg, Germany in 1803 and immigrated to Baltimore in 1833.  His two sons took over upon his death 1864.  By 1908, they were gone and the company joined the American Piano Co. which eventually became the Aeolian-American Corporation, which built some of the most numerous and popular pianos of the 20th century.  In the German language, the word “knabe” means “young boy” or “lad”.