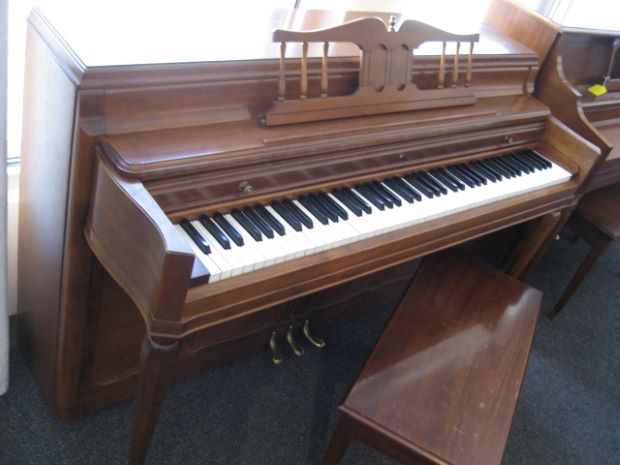 This is a sturdy, well-built American-made spinet with minimal wear for its age. It was built at the Wurlitzer factory in DeKalb, Illinois. It is in excellent playing condition, and it is happily acclimated to our arid climate so it should provide years of trouble-free musical enjoyment. This Wurlitzer walnut spinet piano is an ideal starter or rehearsal piano. Most recently, it led the choir in a house of worship. A tone-escapement chamber in the lower panel looks stylish but it is functional too. It allows bass-register sound waves to escape from the soundboard region located at the bass bridge. The original bench is included and the lid opens for music storage. It needed very little but a tuning, a thorough regulation and cleaning in our restoration shop. We will warrant the piano for two years. Complimentary local, first-floor professional delivery is included. 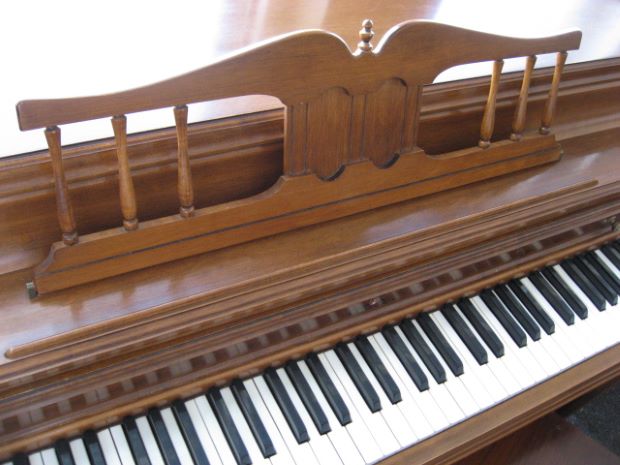 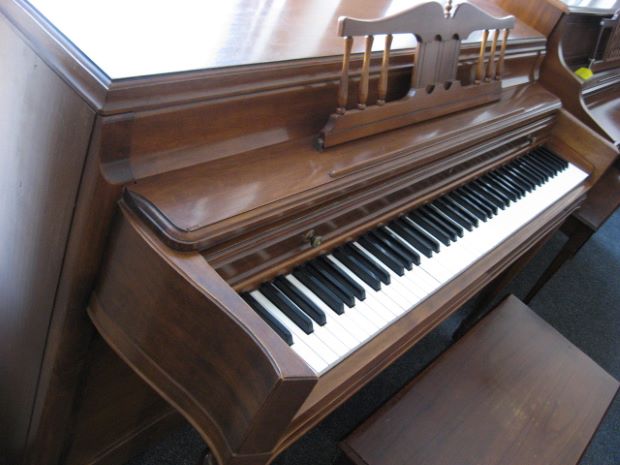 ‘…the name that means Music to millions’. – Past Wurlitzer Company Slogan

By 1910 the company was probably most well-known for “The Mighty Wurlitzer” pipe organs that were found in the finest East Coast dinner theatres. They were also popular for performing in the silent movies. Coin-operated nickelodeons, orchestrions and player-pianos using paper rolls were introduced in the 1890’s. Circuses, amusement parks, roller-rinks and carnival midways used their carousels, hurdy-gurdy instruments and barrel organs. The 1920’s brought the high-end American Mohawk Lyric radio that was exorbitantly expensive. Electrical organs came along in the 1940’s and they became popular in the home market. A “before its time” monophonic synthesizer was incorporated into them in the 1970’s. The nostalgic Wurlitzer Jukebox was introduced in the 1940’s and it was colorful, brightly illuminated and once again, became hugely popular. Today they are collector’s items and command high prices. A CD-playing identical version was reintroduced in the 1990’s. In the 1950’s the first hybrid electric/acoustic Stage Piano was invented and was used by many of the most popular musicians of the rock era including The Doors and Carpenters. These were widely used professionally until they were nudged out by digital technology and sampling. Many modern synths have included the Wurlitzer Electric Piano sample. They are retro instruments today and in great demand among collectors.

Franz Rudolph Wurlitzer immigrated to New York City from Germany in 1854 and opened a piano and musical instrument shop around 1856 where he sold pianos he imported from Germany. He commenced building his own musical instruments when the Rudolph Wurlitzer Manufacturing Company factory was built in 1861 in Cincinnati, Ohio. He built different instruments there before the first Wurlitzer piano was built in 1880. The company built stringed, reed and brass instruments from the Civil War all the way until World War 1. They were vendors to the US Government during most of that time. Franz lived until 1914. The Wurlitzer history in music actually dates back into the early 17th century in Germany where Hans Andreas Wurlitzer was a well-known expert in building beautiful violins.

By the 1900’s there were factories in New York where uprights were built and DeKalb, Illinois where the grands were built. The DeKalb factory stayed open until 1990 and is where this Wurlitzer model 2860 console piano was built. In the early part of the 20th century these two factories built pianos with over a dozen different brand names. The Wurlitzer spinet was introduced in the 1930’s as one of the first short low-profile pianos to appeal to customers whom did not like the way large uprights completely dominated a smaller room. It soon became a huge seller. The Butterfly Grand piano was brought out then also. It had a symmetrical shape to the rim and lid. Wurlitzer was the most innovative piano company at a highly surprising time when the nation was suffering through the Great Depression.